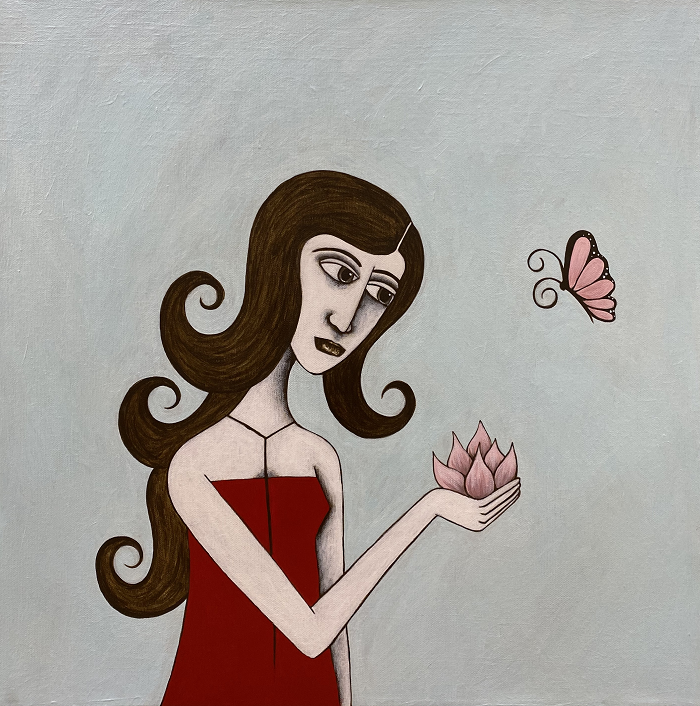 “The female characters in my paintings reside in minimal colour-saturated backgrounds, pondering their lives, loves, moods.  They are reflective with a look of innocence.  Facial expressions are serene.  The simplified figures are whimsical – seemingly existing in their own, safe worlds – yet revealing their stories to those who spend time with them”  – Lauren Lamont

Lauren Lamont’s works are rich in colour and texture and the subjects, even though portraying grace and calm, speak volumes as they appear to reflect on the wonders of life and love.  Lauren’s introspective female figures are taken from life, memory and her imagination – Lauren will often close her eyes and think about how she wants a painting to feel, rather than working directly from life.  When you look at one of Lauren’s paintings you can’t help but wonder what the figure in the painting is thinking.  It could be love lost, simple and pure joy, or the capture of a moment daydreaming.

Lauren studied painting and drawing at the LaTrobe St Gallery, Melbourne, after which she completed an additional two years of a Bachelor of Fine Arts Degree at RMIT, Melbourne.  She has exhibited work in many venues local to her home in Gippsland, Victoria and has held successful exhibitions interstate.

New Beginnings SOLD
Spring is in the air... and so is generosity of sp